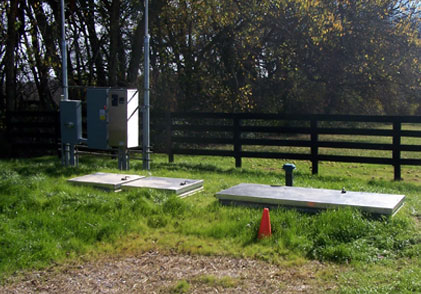 The Commission is made up of three District residents who are appointed by the Shelby County Judge Executive to be Commissioners for four year terms. These Commissioners make policy and set the Rules and Regulations we operate by.

With no internal water supply of its own, West Shelby purchases all of its water. Originally all of the water came from the City of Shelbyville, Kentucky, whose source is the Guist Creek Reservoir. Due to population growth in the 1980's throughout the District, an additional source of water was established in 1990. This source was the Louisville Water Company that obtains its water from the Ohio River.

The Industrial Park tank, at the east end of the District behind Bekaert Industry was completed in 1990 and is a 750,000 gallon tank.

We are proud that during the drought of 2007, when other water utilities in the county were having difficulties, West Shelby had no problem supplying their customers' needs.

With the addition of the Buck Creek Rd. water tank in 2002, this gave the District an additional 1,000,000 gallons of storage. This tank is located along I-64, behind the Shelby County Flea Market.

The District has not only kept up with the growth of this area, we are ready, willing and able to supply the present and future needs of this District. Residential, Commercial and Industrial growth abounds, and West Shelby Water District is ready to serve all those needs.